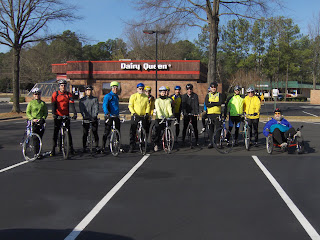 I wrote this about the ride on the website forum 'I had a great ride - was nice to meet everyone - looking forward to doing it again.' And I did.
This ride was another three loop ride but each loop was different and included some roads and some bikepaths. I had a real nice time and everyone was nice - they all had to wait for me many times but on one seemed to mind execpt me I felt like I was messing up other peoples rides. By the time we got back from the second loop I was spent so I bailed out on the third loop. However I was not as burnt as I had been before, I rested and waited around until the bike shop opened because I had never been in it and wanted a look. There was also a group meeting at the same spot who were riding a 37 miles route - I remmber hopping that some day I might be able to do that kind of riding again.
Posted by Unknown at 3:57 PM No comments: 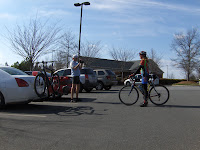 This was my first Slow Spokes ride. The ride was from Lucky 32 on a Sunday afternoon. This ride was orginized by Winnie. The ride was to consist of three loops on the same 7 miles route mostly on on-road bike-paths. There were 4 or 5 of us. Winnie, Zonda, John(who I now know as Pugslyyy) myself and one or two others who I do not remember - sorry. I thought 7 miles with a rest in between each - no problem.

Well riding the ATT which is almost flat and riding those bike paths which were for me very hilly at the time was two different things. I quit after the first loop which was suppose to be an option but I think it surprised everyone when I did it. Truth was I could barely keep up with their 12 mph or less pace and it had consumed everything had to do that. Everyone was very nice and as they rode off I sat down to rested before I loaded up the trike to go home. I really enjoyed riding with those folks but was displeases with my performance. They did not seem to mind my trike and either did not notice or did not care about the electric assist. I continued to ride mostly on my own but looked for small hills to climb and continued to eat according to the plan.
This was my post ride comment -

Was nice to meet you all and ride with you - I had a great time - thanks
Ashby
Posted by Unknown at 2:13 PM No comments: